Last Saturday, Sandi and I loaded up and met Jerry and Judy at Tyler State Park.

As the name implies, it is located near Tyler, Texas.  It was the

The only negative about Tyler SP was that it rained most of the time. There was just enough time to see the Tyler Municipal Rose Garden and walk around the lake.

Our Casita across the water.

Posted by InkDemon at 8:23 AM No comments:

We Return From Vega$

Wow! We had a week to enjoy Vega$. It was like the whole town was waiting for us. The weekend was a little crowded, but after Sunday, Vega$ was like a tomb. ...comparatively.

We saw the old timer. Wayne Newton. Hey! Wayne must be at least 70 now. He explained away his raspy voice. He said he had asthma. He performed for two hours without a break. I was impressed.

For the first time in 40 years, I returned to Fremont street. It was nothing like the original. The Pioneer Casino is a T-shirt shop. In fact, most of the gambling dens are T-shirt shops now. The Golden Nugget is still there as are the Fremont and Four Queens casinos. We watched the bus driver and a passenger get into a fight on the city bus from the Sahara and Fremont Street. Wow! It's Vega$ baby.

All the old show venues are gone along the strip. It's out with the old and in with the new. We stayed at the Grand Desert Resort off the strip.
Posted by InkDemon at 7:49 PM No comments:

We go to Vega$ again

Yes! We went to Vega$.  The video tells the whole story.

Posted by InkDemon at 9:26 AM No comments:

The second day we travelled to Santa Fe, the oldest capital city in North America.

trade route was extended from Santa Fe to Missouri.   Later, the trail served as an invasion route during the Mexican-American War.

It was raining when Sandi, Dawn, and me drove up Interstate Highway 25 to Santa Fe.

Once we got to Santa Fe, we realized that we left our coats in Albuquerque.  The temperature was 54 degrees. Our first task was to find appropriate clothing.

The old plaza is steeped in history.

During the heyday of the Santa Fe Trail, the plaza was the central governmental area as well as a place of trade.  Today the business of Santa Fe’s Plaza is curio shops, art galleries, eateries, and restaurants.

Posted by InkDemon at 6:43 AM No comments:

We arrived at the home of Sandi’s friends, Dawn and Bob Dalton.

The journey from our home to ABQ took 12 hours.

Here are some highlights of a 12-hour trip from Plano to ABQ:

Dawn and Bob live in a lovely  home in the suburban city of Rio Rancho, NM.  The architecture of most homes is wood frames with a stucco siding.

They are learning to adapt to the desert environment.  Water is very precious.  Their yard consists of stone pebbles.   A few desert shrubs they own are watered by drip irrigation.  Color of the landscape is a  beautiful desert pastel.  off in the distance is the beautiful Sandia Peak.

The weather was rainy as can be the case in a desert.  Rain came in short showers.  Temperatures were coldish in the evenings and warming up during the day when the sun came out.  The relative humidity normally is in the low teens.

Posted by InkDemon at 6:27 PM No comments:

We Travel to Albuquerque, New Mexico

We’re going to leave our Casita at home and travel to New Mexico tomorrow.

I looked the address up on Google maps.  It has a nice view of Sandia Peak in the distance.

The Geology of the Area

Sandia Peak is part of the Sandia Range.  They are fault block mountains, meaning that they were pushed up from deep in the underlying rocks.  The force that caused the faulting was continental drift.   Just to the east of the Sandia Mountains, the terrain flattens out into a was once an ancient seabed.

A continental rift is geology is a place where the Earth's crust and lithosphere are being pulled apart and is an example of extensional tectonics.  Click here for an explanation of a Rift Valley.

The Rio Grande Rift occurred about 35 million years ago and runs from Colorado to El Paso, Texas.  Some people believe the Rio Grande caused the deep valley; but quite the contrary, the great river only uses the rift.

Will the rift continue to widen and sink?  Geologists believe the rift is stable, at least for the moment.

Flanking the Rio Grande Rift on the east and west is the San Juan Volcanic Field.  This field includes a large part of Northern New Mexico and Southwestern Colorado.  This field is the source of rich mineral, silver, and gold deposits.

The most recent volcanic activity in New Mexico was south of the Sandia Range near Socorro.  A near perfect cinder cone lies between Raton, NM, and Clayton, NM.  It is the 60,000-year-old Capulin Mountain.

Capulin is part of the Capulin Mountain National Monument.  It features a road to drive to

the summit.  The last time Sandi and I went to Capulin, she became afraid and would not go into the crater.  Ha Ha!  There is also a trail around the crater rim.  The crater rim trail provides a spectacular view of the surrounding topography.  Every peak in the area is an extinct volcano.

Further north of Albuquerque and to the west of Santa Fe is Valles Caldera.  The caldera is a 12-mile-wide crater formed from a collapsed volcanic cinder cone.   The once secret atomic energy research site of Los Alamos sits on the slops of this Supervolcano class of volcano.

From my own observations, the volcanic eruptions have left long fingers of lava flows, huge deposits of of volcanic ash and thick formations of volcanic tuft.  It’s a spectacular landscape.

The city was founded in 1706 as the Spanish colonial outpost of Ranchos de Alburquerque; present-day Albuquerque retains much of the Spanish cultural and historical heritage.

Albuquerque was a farming community and stra-tegically located military outpost along the Camino Real. The town of Alburquerque was built in the traditional Spanish village pattern: a central plaza surrounded by government buildings, homes, and a church. This central plaza area has been preserved and is open to the public as a museum, cultural area, and center of commerce. It is referred to as "Old Town Albuquerque" or simply "Old Town." "Old Town" was sometimes referred to as "La Placita" ("little plaza" in Spanish).

The village was named by the provincial governor Don Francisco Cuervo y Valdes in honour of Don Francisco Fernández de la Cueva, viceroy of New Spain from 1653 to 1660. One of de la Cueva's aristocratic titles was Duke of Alburquerque, referring to the Spanish town of Alburquerque. The first "r" in "Alburquerque" was dropped at some point in the 19th century, supposedly by an Anglo-American railroad station-master unable to pronounce the city's name correctly. Some New Mexicans still prefer the spelling Alburquerque; see for example the book by that name by Rudolfo Anaya. In the 1990s, the Central Avenue Trolley Buses were emblazoned with the name Alburquerque (with two "r"s) in honor of the city's historic name

Albuquerque is also the site of the Sandia Atomic Research Laboratories.

Sandia Base was located at Albuquerque.  I was one of three nuclear storage facilities along with Medina Base, south of San Antonio, TX, and Killeen Base, near Killeen, TX.

Sandia Base was from 1946 to 1971 the prin-cipal nuclear weapons installation of the United States Department of Defense. It was located on the southeastern edge of Albu-querque, New Mexico. For twenty-five years, the top-secret Sandia Base and its subsidiary installation, Manzano Base, carried on the atomic weapons research, development, design, testing, and training commenced by the Manhattan Project during World War II. Fabrication, assembly, and storage of nuclear weapons was also done at Sandia Base. The base played a key role in the United States nuclear deterrence capability during the Cold War.

We Travel to Pagosa Springs, Colorado 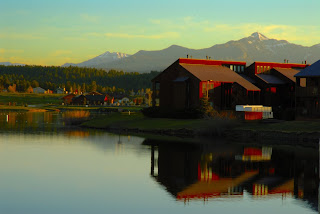 It was a two-day journey up here. I drove all the. For those who don't know, Sandi had hip replacement surgery and really not up to driving. 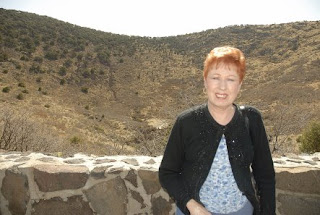 We stopped by Capulin Volcano National Monument, NM, along the way. We drove to the summit. Sandi was terrified of the crater. This 10,000-year-old volcano is dormant, but Sandi had been reading about another volcano that recently became active.

I made the mistake of talking about the "dangers" and altitude (10,800 feet) of Wolf Creek Pass. Sandi was terrified! Luckily, the state of Colorado has video cameras on the pass and we could see the actual conditions on the pass before we left Amarillo on Sunday morning.

So the trip of the pass was very nice. There a lot of snow, but no ice on the road.
On the first morning, I got up early and caught a brilliant sunrise on my Nikon D-200 camera. Our Wyndham timeshare resort has a beautiful pond outside the back patio. The pond was glassy smoothe and the sunlight on the snow capped mountain tops was beautiful.


We spend the day driving around Pagosa Springs. We drove on a dirt road to get some mountain 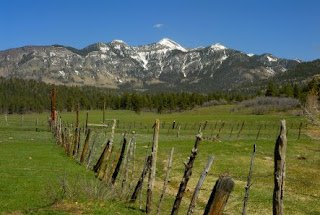 pictures. I wanted images without power lines and signs of human habitation. Those sights are hard to find driving around in a Lexus.
On Tuesday, we drove into Pagosa Springs and visited the hot springs.
On Wednesday, we drove to Chama, NM, where the Cumbres & Toltec narrow gauge railroad is headquartered. The rail route tops out at 11,000 foot elevation on the trip up to Antonita, CO. Everything was mostly closed. The trains don't run until around May 30th. 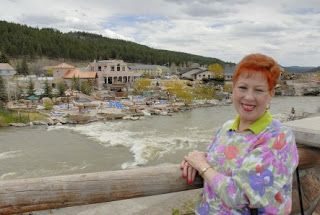 Posted by InkDemon at 8:20 AM No comments: